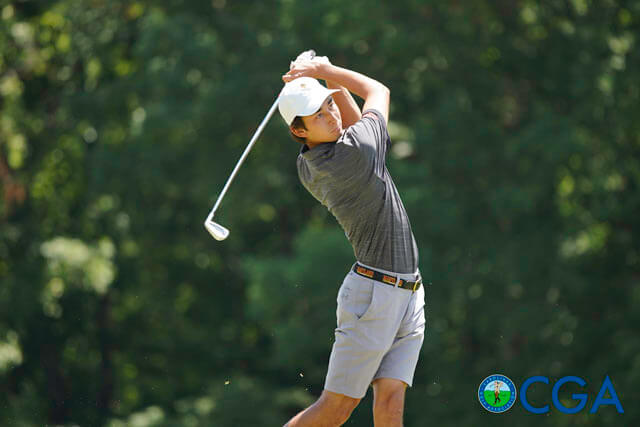 John Eades of Charlotte, N.C. is the latest Carolinian to prove that mid-amateurs can still hang with the “young guns.” With his win at the 59th North Carolina Amateur Championship at Gaston Country Club Eades defeated several of the area’s best collegiate-level golfers and one of the toughest fields not only in the state but across all of amateur golf.

“I’m just grateful,” said Eades. “You don’t know how many of these you’ll get to play. You don’t know how long you’re going to be good. So I thought of it as an opportunity today. What a great opportunity at 36-years-old to get a chance to win a North Carolina Am without playing a whole lot at home…To beat the college kids, means a lot because I know how much they practice and play. To get the opportunity to win the North Carolina Am is something they can’t take away from me.”

Eades, the 2017 Carolinas Mid-Amateur champion, shot 7-under-par, 273 total in the 72-hole marathon to win the championship by five shots. He got off to a rocky start Sunday making three bogeys for a 3-over-par, 38 on his opening nine. The two-shot lead he started with Sunday morning had been cut to one by the early afternoon.

“I felt in control the entire round which sounds crazy because I bogeyed eight and nine to make the turn,” said Eades. “But I just felt like I was supposed to win. I really believed that. When I teed up on Thursday I felt like I was going to win. I wasn’t playing to make a cut. I wasn’t playing for second. From the beginning I had it on my mind to win this golf tournament.”

Eades battled back making three birdies and no bogeys on his closing nine to finish at 7-under-par, 273 for the championship.

Blake Taylor of Atkinson, N.C. is one of those up-and-coming collegiate golfers that the Eades was referring too. Taylor, a rising senior at Eastern Carolina University came in hot off a runner-up finish at the United States Four-Ball Championship played at Bandon Dunes in May. Taylor tied Eades on Saturday for the low round of the championship with a 6-under-par, 64 on a difficult course set up that only yielded 32 under-par rounds over four days. Taylor’s final round of 1-under-par, 69 put him in a tie for second place at 2-under-par, 278 for the championship.

Chad Wilfong of Charlotte, N.C. was another mid-amateur golfer making waves this week at Gaston Country Club. Wilfong, the 2001 North Carolina Amateur Champion, had the 18-hole lead in this year’s championship. Wilfong approached the 12th tee four shots off the lead but went birdie-eagle on Nos. 12 and 13 to pull within one shot of the lead. He would ultimately fall one place short of winning his second N.C. Amateur title 18 years after his first win at the championship.

Another golfer hot on Eades trail was local crowd favorite and Gaston Country Club member, Steve Dellinger of Gastonia, N.C. With his dad on the bag on Father’s Day, it looked like Dellinger was feeling inspired and ready to claim the championship for the home club. Birdies on No. 7 and No. 10 pulled Dellinger within one shot of Eades’ lead. A couple late bogeys in Dellinger’s round took him out of the running and he would ultimately finish in fourth place with a 1-under-par, 279 for the championship.

“This gives me a ton of confidence that I can still get it done and can win under pressure,” said Eades. “I am just so encouraged to see that there are so many great players in this state. So to win a title like this when you know how many great players are here, makes you feel good to think that you can still get it done.” The Carolinas Golf Association thanked the club members and staff of Gaston Country Club for hosting this event. The tournament would not be possible without their dedication and hard work. A special thank you to Bob Knoch, General Manager, Thomas Troncoso, Director of Golf and Golf Course Superintendent Tim Carpenter.