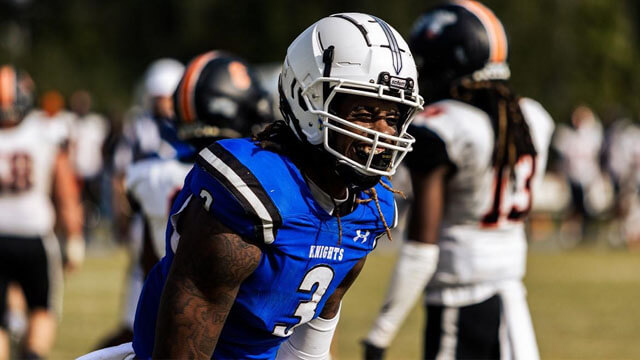 LAURINBURG – The St. Andrews University Knights have claimed their first win of the regular and their first conference win in the Appalachian Athletic Conference. The win brings the Knights record to 1-6 on the season and now 1-0 in the conference.

The Knights began the day on the receiving side and the offense was able to get out to a hot start in the contest. As the Knights drove 66 yards down the field in 14 plays, it was exactly the type of start the team would be looking for. After methodically rushing his way in the red zone, Dennis Leggett (Fair Bluff, NC) punched the ball in from one yard out, and an extra point gave the Knights a 7-0 lead.

After the teams traded a couple punts, it was the Bulldogs who found themselved in the endzone this time, as quarterback Jake Medders found Chris Thomas in the endzone for a 16 yard catch and throw to tie the game at seven apiece.

The teams traded punts and an Andrew Fowler (Hillsdale, MI) interception didn’t help the Knights offense in the field position battle. After starting a drive before half at their own 24 yard line, St. Andrews running back Dennis Leggett broke free for a 38 yard scamper to the Bulldogs 26 yard line. After an Anterius Carpenter (Charlotte, NC) 18 yard reception the Knights were in prime position for points at the end of the half, and a Cameron McPhatter (Lumberton, NC) field goal ensured that the Knights would go into the half up 10-7.

After the Knights forced a three and out to start the third quarter, the Knights took great field position at the Union 45 yard line on their next offensive drive. Fowler capped off an 18 yard run on the first play, to make a statement coming out of half. On a 3rd and 17, Fowler found a streaking and open Marquis McCoy as the recent transfer from Southern Miss hauled in a 25 yard touchdown reception. Although the extra point attempt was missed, the Knights held onto a firm 16-7 lead.

On the kickoff, John Brown (Aberdeen, NC) forced a fumble that was recovered by Kyle Amos (Florence, SC) to set the Knights up on the Bulldog 24 yard line. After a few unsuccesful plays, McPhatter was able to put the field goal through the upright for a Knights field goal.

On the next Bulldog possesion, new quarterback Myron Norfleet found an open Tony Norman for a 37 yard catch and run. A couple plays later, the fleet footed quarterback ran it into the endzone from two yards out to make the score 19-14.

After the offense was forced to give it back to Union, Myron Norfleet found an open Isaiah Johnson for a 27 yard touchdown reception and after the extra point wa sput home, the Bulldogs claimed their first lead of the night at 20-19.

With the Knights desperately needing a good offense showing in the fourth quarter, Andrew Fowler decided to use his legs instead of his arm. After a 15 yard run on first down, Fowler was able to find Anterius Carpenter on a roll out screen play for a huge 44 yard catch and run. A couple plays later, Folwler was able to run it in for the touchdown from 11 yards out to give the Knights a 27-26 lead.

With 1:35 left in the game, Union’s offense took the field and needed something big. That’s just what they got as Myron Norfleet found Isaiah Johnson for a 32 yard touchdown bomb to put the score at 27-26 in the Knights favor. The Bulldog’s elected to go for the two point conversion and with all of Knight nation on the edge of their seats, the try was unsuccessful and a Knights victory was secured.

The Knights will get a much deserved bye week next week, as they gear up to travel to Kentucky Christian on October 22nd in a “Battle of the Knights” showdown.