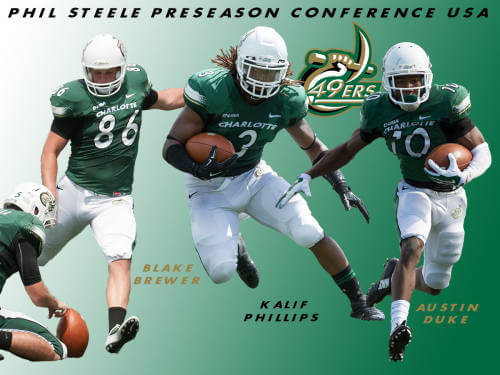 CHARLOTTE, N.C. — The Charlotte 49ers, who are moving to the Football Bowl Subdivision (FBS) in 2015 as a member of Conference USA, will have three of its home games broadcast on the FOX and CBS family of networks, according to the preliminary Conference USA TV package, released today.

The 49ers non-conference home game vs. Temple, Friday, Oct. 2 will be broadcast at 7 p.m. on the CBS Sports Network. In addition, the 49ers home games vs. Marshall (Sat., Oct. 31) and UTSA (Sat., Nov. 14) will be broadcast on a yet to be determined FOX network. Game times and networks for those games will be released 12 days prior to the game date.

Games broadcast by the 49ers local TV partner, WCCB Charlotte, will be released once the league package is finalized.

The 2015 football season marks the fifth year of a multi-platform media rights agreement between Conference USA and FOX Sports to broadcast a minimum of 30 games. Games appear on FOX Sports 1, as well as FOX Sports Networks owned and affiliated regional networks, which reach more than 85 million homes, and FOX College Sports.

This season marks the 11th year of C-USA’s partnership with CBS Sports Network that includes significant national and regional exposure for football, men’s and women’s basketball and other C-USA sports. CBS Sports Network is the 24-hour home of CBS Sports available across the country.

“We are pleased that we will have so many of our football games on television and distributed to C-USA fans throughout the country,” said Conference USA Commissioner Britton Banowsky. “We are looking forward to an exciting conference season that our fans will be able to watch play out this fall.”

Duke was the 49ers leading receiver for the second straight year. He caught 79 passes for 1373 yards (124.8 yards per game) to become the program’s first-ever 1,000-yard receiver. He had a record six 100-yard receiving games, including two games in which he went for more than 200 yards. He scored 10 touchdowns (9 receiving) and had seven TD receptions of 60 or more yards, including a record 98-yard TD vs. James Madison that stands as the 49ers longest play from scrimmage. He scored a school-record four touchdowns at The Citadel (3 receiving; 1 rushing), had a string of six games with a receiving TD and broke the 49ers school-record for longest TD pass in four consecutive games (74 vs. #25 Charleston Southern; 80 at Gardner-Webb; 83 at Citadel; 98 vs. James Madison).

Phillips became the 49ers first 1,000-yard rusher and scored a record 20 touchdowns as a sophomore. He rushed for 1441 yards (131.0 per game) on 229 carries. He had seven 100-yard rushing games and rushed for 150 or more in each of the final five games. In addition, he rushed for a school-record 196 yards vs. #25 Charleston Southern. He had a record three rushing TDs in four games and scored 10 touchdowns over the final five-game streak in which he scored at least one TD. He had three TD scores of 50 or more yards, including a record 77-yard TD run vs. CSU. He had 25 carries of 15 or more yards, including three of 50-plus.