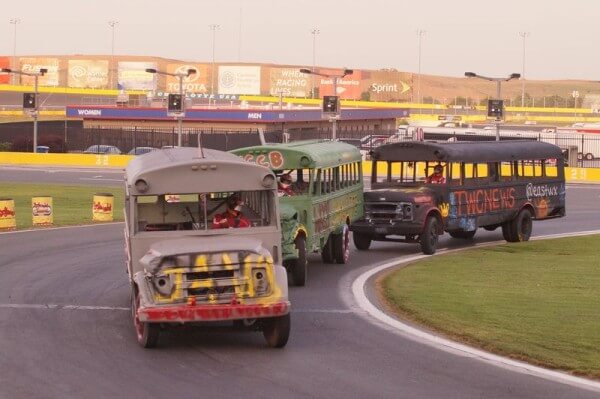 Joe Howard started on the front row and grabbed the lead in Turn 1 and never looked back in his debut the Media Mayhem school bus race at Charlotte Motor Speedway’s Bojangles’ Summer Shootout. Read about all the races and the results.

A new Dean Smith Award has been established and the award and scholarship program begins next October. Here is the ACC Digital Network’s report including Coach Roy Williams.

The Pigskin Preview Luncheon will be held on July 23 at the Embassy Suites in Cary. Registration starts at 11:00AM and program will commence at 11:30AM.

There will be an opportunity to ask a question via the website, www.nffbilldooleychapter.org, “Contact Us” form.  The emcee, WRAL Jeff Gravley, will randomly select questions for the five coaches to answer at the event.

On August 23, 1995, Coach Bill Dooley, one of the “winningest” coaches in the Atlantic Coast Conference history, invited Athletic Directors, Coaches and Representatives from the University of North Carolina, Duke, North Carolina Central and North Carolina State University to join him and NC Governor, Jim Hunt, at the State Capitol Old Senate Chambers. It was at that meeting that the universities pledged their support to the newly formed NFFCHOF Chapter and its mission.

Since its inception, Executive Director Bill Dooley has worked to promote chapter growth. In 2012 East Carolina University joined the Chapter. In 2014, the NFFCHOF Board of Directors unanimously voted to name the chapter after its founder. Today the Bill Dooley Chapter ranks as the largest in the country.

Each year the Chapter awards up to 38 scholarships to high school football student athletes in Wake, Orange, Durham and Pitt counties. This year is the 20th year of honoring these young men.