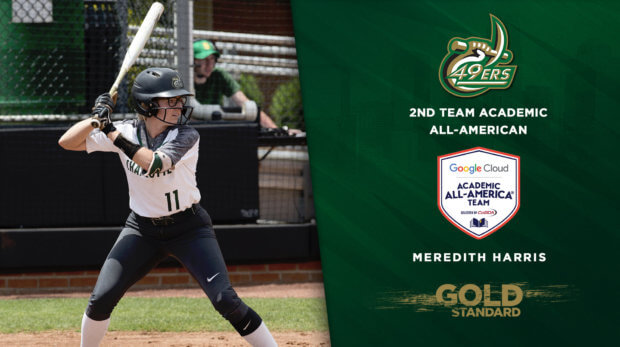 The 2019 Google Cloud Academic All-America® Softball Team celebrates the nation’s top players for their efforts on the field and in the classroom.

Harris was originally selected for the 2019 Google Cloud Academic All-District 3 Softball Team in May and was nominated for the All-America team.

The Charlotte native is picking up Academic All-America honors for the first time. Harris completed her undergraduate studies in English with a 3.95 grade-point average and has maintained a stellar 3.86 GPA while pursuing her MBA from the Belk College of Business. Her list of academic accolades includes being a five-time ‘Perfect Niner’, making six appearances on the Chancellor’s List, and earning seven appearances on the Athletic Director’s List. Harris has been named to the Conference USA Honor Roll four times, received the Conference USA Commissioner’s Medal in 2018, and won Charlotte’s Bonnie Cone Award in 2017. She was named to the InTouch Credit Union Conference USA Softball All-Academic Team in 2017.

Over the last four seasons, Harris has been a reliable presence in the lineup, making 182 career starts in 184 games played for the 49ers. Harris drove in 107 runs in her collegiate career while racking up more than 150 base hits, including 13 home runs.

Harris’ senior season was highlighted by a pair of grand slams, both of which helped the 49ers topple conference opponents. She clubbed her first on March 9 in game one of a double-header against UTEP, cementing a comeback victory. Her second came on April 27 against FAU. She was second on the team with 34 RBI and third with five home runs, which matched her career-high.