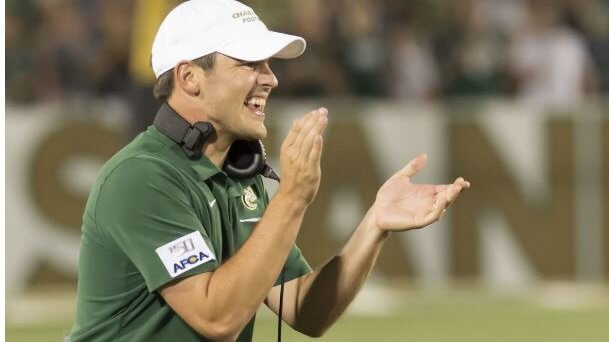 Charlotte scored five touchdowns in the first half as Will Healy notched an appropriate 49-28 victory over Gardner-Webb before a sellout crowd of 16,119 in his first game as the 49ers’ head coach.

“These guys worked really hard,” Healy said afterwards. “It is hard to win football games. I promise you I’ve started 0-1 more than I have 1-0. Winning your first game is big deal.”

Senior running back Benny LeMay and red-shirt sophomore quarterback Chris Reynolds both had a pair of touchdown runs and Reynolds also threw for a three-yard score as Charlotte (1-0) put up its most points in the FBS era.

LeMay had 16 carries for 120 yards and the two TDs, including a 65-yard burst to close the first half. That 65-yard TD run is the ninth-longest in school history and the longest of LeMay’s career.  It was his eighth career 100-yard rushing performance.

Reynolds was 14-of-20 passing for 136 yards, a TD and one interception. He split time, as scheduled, with starter Brett Kean, who was 4-of-8 for 50 yards with a TD and two interceptions. Kean threw a 31-yard touchdown pass to freshman Micaleous Elder for Charlotte’s final score. The TD reception was Elder’s first career catch as a 49er.

“I thought Chris definitely gave us a lift coming off the bench. Nothing surprises me with him. He’s a walk-on turned starting QB,” Healy said of Reynolds, who started six games last year before being injured. “He plays with a chip on his shoulder. He’s been very unselfish.”

Charlotte held the Runnin’ Bulldogs (0-1) to 56 yards of total offense in the first half and gave up just 60 yards passing for the game. The 49ers also rushed for 322 yards, the fourth-most in school history.

28 SECOND-QUARTER POINTS
Charlotte scored 28 points in the second quarter to break open a 7-0 game for a 21-point halftime advantage, 35-14.

On his second possession as QB, Reynolds scored on a three-yard run to complete a 12-play, 79-yard drive. He hit RB Aaron McAllister for a three-yard touchdown on his next possession. The 49ers scored on a blocked punt when Solomon Rogers scooped up BJ Turner’s block and raced 16 yards for the TD. LeMay closed out the second quarter scoring with his 65-yard run with 40 seconds left in the half.

The 28 points match the most by the 49ers in the second quarter of a game in school history.

RECORD BOOKS
With his fumble recovery in the third quarter, Ben DeLuca took over sole possession of the 49ers record with six career fumble recoveries.  R-Sr. DE Alex Highsmith had 2.0 sacks in the game, moving past Zach Duncan and into second-place all-time in career sacks with 8.0. The 49ers career record is 13.0 held by current Cleveland Brown Larry Ogunjobi.

OPENERS
Charlotte is now 3-0 in season-openers at home and 5-2 overall in season openers.  Charlotte is 6-1 in its first home game of the season and the 49ers have scored at least 30 points in each of those contests.