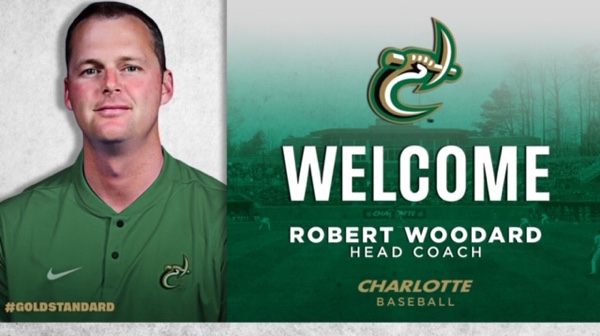 Charlotte, N.C. — Charlotte 49ers Director of Athletics Mike Hill named Robert Woodard to lead the baseball program. Woodard, a Charlotte native, has spent the past three seasons as the pitching coach at the University of North Carolina. He has also served as pitching coach at UNCW and Virginia Tech. Woodard will replace Loren Hibbs who announced his retirement after 27 years at the helm.

“This is an exciting moment for our baseball program, “Hill said. “Robert demonstrated to us that he is ready to take this step. He has been part of one of the best coaching staffs in baseball over the past several years and he is widely respected in collegiate and professional baseball circles. We’re looking forward to welcoming him home.”

“This is a day I’ve dreamed about and prepared for. I’m grateful to Mike Hill, Darin Spease and the team at Charlotte for trusting me with this opportunity,” said Woodard. “Coach Hibbs has built a great foundation here and we will expect to be excellent in everything we do. I can’t wait to get started.”

This past year, Woodard helped lead North Carolina to 46 wins and an NCAA Super Regional appearance. In 2018, North Carolina played in the College World Series in Omaha for the 11th time in program history.

Woodard is the all-time winningest pitcher in North Carolina history, with a 34-5 career record. Woodard, who attended Myers Park High in Charlotte, was a three-time All-ACC performer and the 2006-07 recipient of the Patterson medal, Carolina’s highest athletic honor. As a collegian, Woodard never lost a home game as a pitcher, finishing his career with a 22-0 record.

Woodard was drafted in the 20th round by the San Diego Padres and spent three seasons in the Padres organization before beginning his collegiate coaching career.

“It is an incredible honor to be named the fifth head baseball coach of the Charlotte baseball program. The moment Mike Hill reached out with he and his staff’s decision, is a moment I will never forget. Charlotte is home for me. It’s where I grew up and my parents still reside. The opportunity to lead my hometown city’s college baseball program is truly special. This opportunity would not be possible without all of my former players from along the journey. It would also not be possible without the belief and mentorship of Coach Fox and Scott Forbes at UNC. They are two of my closest friends both in and outside the game and two people I am very thankful to have in my life. I will also be reaching out individually to the many others throughout the game that have enabled me in this very special opportunity. I cannot wait to get my feet back on the ground in the Queen City, meet the team and assemble our staff.  We are going to bring a brand of baseball to the city of Charlotte that our former players, alumni and fan base will all be proud of.”

WHAT THEY ARE SAYING

“I knew when Robert was pitching for us that he would one day be a great coach. He was not only one of the best pitchers we have ever had at UNC but one of the smartest. He studied the game on a daily basis. He is passionate about the game but, more importantly, about the players and staff. He is a great person who knows the true meaning of being a coach. Woody helped our program tremendously these last three years in many ways and I will always be grateful for that. He told everyone when he arrived here we were going to Omaha. He willed us there and the program has not been the same since.  I owe him big time for that alone. I am very happy for him and know he will do great things at Charlotte.”

“Athletics Director Mike Hill has made a great hire in Robert Woodard from the University of North Carolina. Coach Woodard is one of the all- time great pitchers in UNC history and has positively impacted the pitching staff since his return to Chapel Hill as the pitching coach for Mike Fox. As a native North Carolinian, his recruiting prowess will make an immediate impact for the Charlotte 49ers. He knows what it takes to win and he has the blueprint for success.”

“Charlotte just hired one of the best young coaching minds in the nation. Robert Woodard has excelled as an outstanding player, proven himself as knowledgeable coach/recruiter and gets to come home to his roots. This is an unbeatable combination. Congrats to Mike Hill and 49er nation.”

“Robert is a perfect fit for Charlotte. The success he’s had at UNC as a pitcher and a coach makes this hire a great one. He will build the program the right way and I’m sure he will have tremendous success with the 49ers. “

“Robert Woodard is a rising star in college baseball and has done a fantastic job leading the North Carolina pitching staff for the past three years. His analytical but relatable approach to pitching is something that I’ve been extremely impressed with. He’s an ideal choice to be the next head coach at Charlotte and I could not be happier for Robert.”