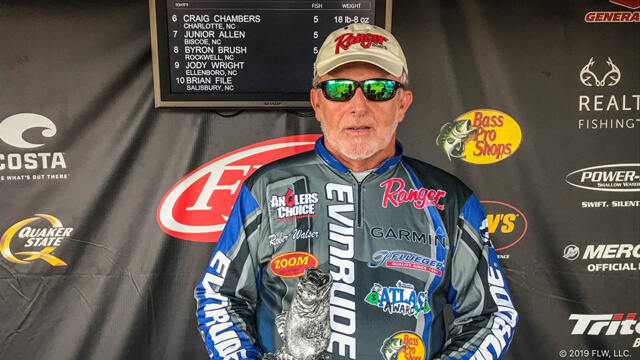 “I caught my fish flipping docks with a [Zoom] Z Craw and Z Hogs,” said Walser, who earned $6,141 for his victory – his second BFL win in 2019. “The Garmin Panoptix allowed me to see the brush under the docks – some had it and some didn’t, but it was nice to know where it was when I was flipping. I rotated through three colors, which were darker colors and green-pumpkins. My bait choice depended on the water color and sky conditions.

“I primarily fished mid-lake, which encompassed five of the creeks I fished,” continued Walser. “The water was low enough where you could get under the bridges, which hasn’t happened in a while. That allowed me to spread out a bit more.”

“I caught at least three to four limits out there, and had my first five in the boat before 9 [a.m.],” said Walser.

The top 10 boaters finished the tournament in:

Complete results can be found at FLWFishing.com.

Stephen Cannon of Wilkesboro, North Carolina, caught a bass weighing 6 pounds, 7 ounces – the heaviest of the event in the Boater Division – and earned the day’s Boater Big Bass award of $475.

The top 10 co-anglers were:

Greg Deal of China Grove, North Carolina, caught the heaviest bass in the Co-angler Division, a fish weighing in at 7 pounds even. The catch earned him the day’s Co-angler Big Bass award of $237.

The top 45 boaters and co-anglers in the region based on point standings, along with the five winners in each qualifying event, will be entered in the Oct. 10-12 BFL Regional Championship on Lake Hartwell in Seneca, South Carolina, presented by Navionics. Boaters will compete for a top award of a Ranger Z518L with a 200-horsepower outboard and $20,000, while co-anglers will fish for a new Ranger Z518L with a 200-horsepower outboard.

The 2019 BFL is a 24-division circuit devoted to weekend anglers, with 128 tournaments throughout the season, five qualifying events in each division. The top 45 boaters and co-anglers from each division, along with the five winners of the qualifying events, will advance to one of six regional tournaments where they are competing to finish in the top six, which then qualifies them for one of the longest-running championships in all of competitive bass fishing – the BFL All-American. The 2020 BFL All-American will be held April 30-May 2 at Lake Hartwell in Anderson, South Carolina, and is hosted by Visit Anderson. Top performers in the BFL can move up to the Costa FLW Series or even the FLW Tour.

FLW is the world’s largest tournament-fishing organization, providing anglers of all skill levels the opportunity to compete for millions in prize money in 2019 across five tournament circuits. Headquartered in Benton, Kentucky, with offices in Minneapolis, FLW and their partners conduct more than 290 bass-fishing tournaments annually around the world, including the United States, Canada, China, Italy, South Korea, Mexico, Namibia, Portugal, South Africa, Spain, and Zimbabwe. FLW tournament fishing can be seen on the Emmy-nominated “FLW” television show while FLW Bass Fishing magazine delivers cutting-edge tips from top pros. For more information visit FLWFishing.com and follow FLW at Facebook, Twitter, Instagram, and YouTube.